Our flight out of JFK airport was delayed by four hours, giving us a 2:45 am departure. The waiting room was full –the overwhelming majority was Arabic speaking, and a majority of those were Muslims. Having been away from Palestine for two years, and being an Anglo-American Protestant, I had forgotten the unnatural discomfort of standing out. Living in Palestine has been my closest exposure to living the minority experience.

For our fellow Muslim travelers, the fasting time was mercifully short due to our traveling East. Overall, we experienced maybe six hours of sunlight today. When the sun had set behind us, the captain announced the end of the fast, and the call to prayer sounded over the loudspeaker. Bags of figs appeared out of luggage, and hands eagerly shared them with neighbors, Muslim and non-Muslim alike. “Ramadan Kareem (Generous Ramadan),” one would greet. The other would respond, “Allah Akram (God is more generous).” I then remembered what I had missed about the Arab culture, Christian and Muslim alike: strangers quickly become acquaintances; acquaintances quickly become community.

note: there will likely be a 1-2 day lag on all of my postings due to a variety of reasons, but mostly due to the unpredictability of the situation from day to day 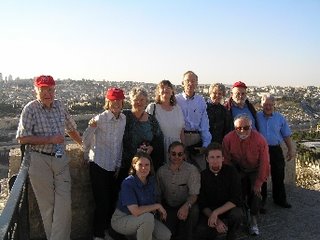 My trip has several purposes and several legs. The first is with Fellowship of Reconciliation, an interfaith organization that sprang out of German and English peace groups during World War I. Since then, they have been working tirelessly across all kinds of borders, political and otherwise, on behalf of peace and reconciliation. There are chapters across the world, the largest being in the United States. Their highest profile, perhaps, came during the Civil Rights era.

The thirteen of us, both Christians and Jews, comprise their seventeeth interfaith delegation to the Middle East. The itinerary is daunting and exciting, providing an opportunity to meet with and hear the voices of many parties in Israel and Palestine. There is, given F.O.R.’s history and commitments, a particular focus on those Israelis, Palestinians - Muslims, Jews, and Christians - working for peace and across the divides. Some of them are old friends and acquaintances from our time in Israel/Palestine, some of them folks we have heard of or met since returning to the States. All in all, it promises to be exhausting and exhilarating!

But now, given the several days of travel ahead of us, it’s time to get some well-deserved rest!