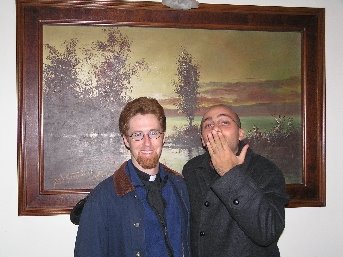 A four-hour layover in New York turned into a nine-hour marathon, extending an already long day. I will definitely need time to digest these past few weeks. It was a good trip, a great trip, and intense trip. But it's always good to be home again.

The problems began when I boarded the Palestinian bus in Jericho. There, Palestinians are separated from their luggage. After a document check by the Palestinian Authority, the bus enters into the Israeli-controlled border crossing. Most of the way, I was treated to the same treatment Palestinians receive. Nothing particularly remarkable, just noticeably more inefficient than the treatment the non-Arab section receives.

Exiting Israeli border security, though, I was transferred to the "tourist" (i.e. non-Arab) bus. My luggage was still with the Palestinian luggage, but I was promised everything would be fine. In a word, it wasn't.

Palestinians, before leaving the Israeli side of the Jordan River, identify their bags and move them to another bus, which meets them after they cross through Jordanian security. Since I was on the "tourist" bus, I ended up in Jordan with my bags back in the West Bank. Five hours later, let's just say I was happy to see my bags again. 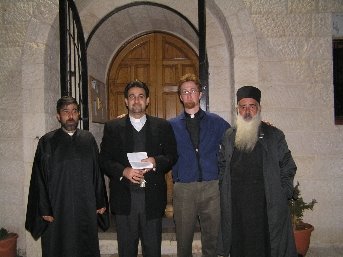 Note: This morning, I was invited to preach in the Anglican Church by Fr. Fadi. I followed up in the afternoon with a lecture on both the PCUSA's corporate engagement process and a brief introduction to "Christian Zionism." I preached in English with Arabic translation, but in the afternoon I tried my hand at Arabic - with mixed results. A bit too technical, I fear, for my level of vocabulary.

My last day in Zababdeh. While I didn't get to see everyone I wanted, I certainly saw many people. I do hope to come back periodically to visit, which eases some of the pressure.

In the evening, I visited with the new Mennonite Central Committee volunteers living here and teaching English at the school. Before coming, they had done a Google search for Zababdeh, finding our website. Before arriving, they had worked their way through the first year and a half of our daily journal archives. It appears we were a bit guarded about our early frustrations and stresses of our time in Zababdeh, which gave them some pause that what they were facing was somehow unusual. I assured them that, in fact, our first year was quite difficult for a number of reasons. Perhaps a re-write is in order?

It is comforting to know that our dedicated work of writing has become an accessible archive - both for our experiences and for the times that we and the people of Zababdeh faced. 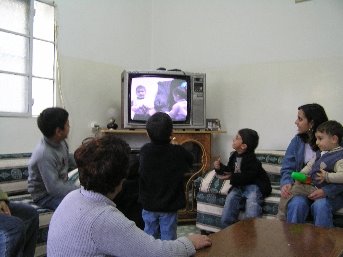 Note: I spent much of the day with the Diab family. Fr. Firas (Melkite) and Fr. Fadi (Anglican) are brothers, serving two of the congregations here. We watched our film being broadcast on SAT-7, which today focused on Fr. Firas’ ministry. The children were especially delighted to see themselves on TV.

This whole trip has been far more intense than I had expected. From the varying perspectives I’ve heard to the suffering I’ve witnessed, it has been gut-wrenching. Today was particularly so, sitting down with some dear friends – both from Zababdeh and from the local Arab-American University of Jenin – to get their take on the current state of things. I also asked them, in particular, to this question: what it is that the Presbyterian Church (U.S.A.) can be doing to respond?

Essentially, Palestinian society is facing three major problems. The Israeli Occupation is still the primary obstacle, and the chaos it creates in Palestinian society has deep repercussions. But is far from the only problem. Islamic fundamentalism, represented by the likes of Hamas and Islamic Jihad, is distressing for those seeking the modernization of Palestinian society. Meanwhile, the Palestinian Authority (run by the Fatah Party) is beset with deep-seated corruption and independent militias.

In order to understand the problems, as well as the possible solution, one friend suggested that we begin by looking at where these three power brokers do their recruiting.

There is an abundance of large Palestinian families – with eight or nine children – with uneducated parents. Fatah recruiters look for the strongest son, the one who is giving his parents the most trouble. Fatah-related militias are becoming notorious for their extortionism and demands for protection money. Hamas, on the other hand, seeks out the gentlest son, the most reflective one. This has led to Hamas’ rise in political savvy and an improved reputation. The Israelis, looking for collaborators, also go to the same kind of family. They seek out the greediest one, the one who is willing to commit betrayal in exchange for financial recompense. They have made deep inroads into the community.

It may seem an abstract, but there is something to this vision of the metaphorical Palestinian family. It is not too outrageous to imagine these three recruits as brothers. Their situation makes them particularly vulnerable. And so, this family also holds the key to a brighter Palestinian future.

What can the Church, in particular, do?

The answers from my friends aren’t completely clear, but this much is: the advocacy work to end the Occupation could continue; the divestment process and corporate engagement must go forward; our work on economic development in Palestine is needed; our ongoing partnerships in ministry, education, health care, and relief are essential.

But the one question remains: what about the three brothers?

Note: Zababdeh is a village of only 3000. So far, I've only been able to leave it once, to join Fr. Toma for morning prayers in Tubas. The section of our film highlighting their community was broadcast recently on SAT-7. We joked that they are now all film stars! 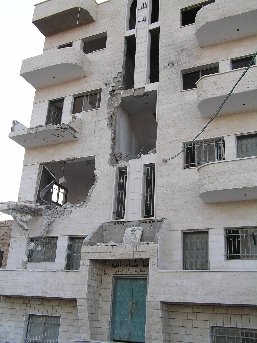 On Monday, a Palestinian collaborator called the Israeli Army. Islamic faction activists were holed up in a four-story building in Zababdeh. Within minutes, the Army arrived and shut down a huge section of the town. The streets were filled with soldiers and jeeps. Shooters were positioned on every roof in the area. The students living in the building came out, hands on their heads. "No one is left," they swore to the Army. They didn't believe them, nor the owner of the building. The snipers starting shooting into the windows of the apartment in question. Hours passed. Not one bullet was fired in return.

Fearing a booby trap, the Army brought a Caterpillar D9 Bulldozer. They began to destroy the building, threatening to level it to rubble. The sides of the building looked like Beirut in the 1980s. The bulldozer ripped off much of the building's facade, including two balconies. Explosives blew off the iron doors. With the intervention of church leaders in town, finally, the Army backed off. They sent in the K-9s. In the end, no one was in the building. 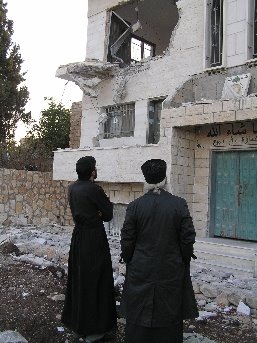 The building belongs to Fr. Toma, the Greek Orthodox priest. His son, an engineer, had saved for eight years working abroad. This was to be his home, his nest egg, the sum of his savings. The damage to the building, from the external to the infrastructure (electricity, sewage system, etc.), is so extensive he will need to save up another four years.

This place, this whole land, is damaged. From the factions that hide in other people's property to the Army which destroys it with flimsy evidence, the damage runs deep. It will take years to fix.

Back in Zababdeh - it feels great, and yet strange, to be "home" again. I've spent most of today visiting and being visited. My first impression of town has become a local legend already. 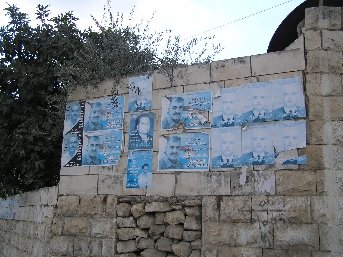 Walking down the street, I saw a faded picture of a friend of mine on the wall of a building. When I was living here, the only time that I saw such pictures was when someone had become a shaheed - a martyr. Naturally, I assumed this was the case. Then another friend of mine, on another wall: another martyr. Then another, and yet another. I began to wonder what had happened to this town since I left it!

Finally, I saw the picture of the town's former mayor. It was then, finally, that I understood: these were candidates for the municipal elections, people running for the town council.

In some ways, it seems that the cult of martyrdom has given way to the cult of democracy. But if the pictures tell us anything, both are fading quickly.

Note: Tomorrow, I am headed back to Zababdeh for the duration of my stay. It is a short stay, only four days, but I am grateful for as much time "back home" as I can find. 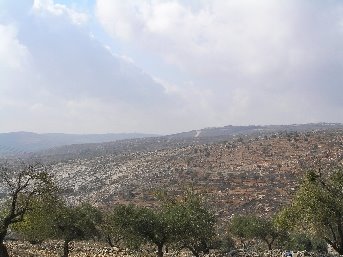 Today was our last day of meetings on the economic development of Palestine, the first step of many along the road. It was a great day to end on. We were meeting with some of the key decision-makers within Palestinian society based in Ramallah.

When I lived here, from 2000 to 2003, I had the chance to meet and hear from the decision-makers of the previous "generation" (I use the word loosely). But one key thing was always lacking: there was no articulated vision for how to get out of the problems that faced them. There was always the focus on the Occupation, at times the issue of extremism, but never any sense that their people deserved leadership with vision.

This new "generation" of leaders, sometimes referred to as the Technocrats, is different. They are realistic, facing the fact that the Occupation continues. They are keenly aware of the power and the danger of the radical extremists within Palestinian society. And yet, while seeking accountability, they are also clear that there is a need to build civil society in the meantime. Advocacy and diplomacy continue. Economic development moves forward, despite the obstacles. In a word, there is vision.